This month’s newsletter is going to be a little different than what you’re used to.

Because I recently returned from a South African safari, and while I was there, I experienced several lessons, as well as an incredible “aha” moment … one I can’t wait to share with you.

When a business colleague invited me and 8 other women to join her for a girls’ trip to the safari, I was SO excited.

The Madikwe Game Reserve in South Africa was nothing short of amazing; in fact, I now consider one of the days the second most epic day of my life (next to my wedding day!).

Every day, we went on a morning AND afternoon safari.

On the second day (aka the second most epic day of my life), we tracked lions. Yes – LIONS!

I was like a kid at Christmas! I was practically bouncing out of my seat as we started out in the open-air safari truck.

That’s when I asked Africa, “What medicine do you have for me today? What gifts?”

Within minutes, the universe answered.

We happened upon a cheetah. WOW – I can’t even put into words the beauty and grace that animal exhibited.

In fact, I was so blown away, I looked up the animal totem of the cheetah, right then and there. I learned it’s about reacting in a quick and flexible way. 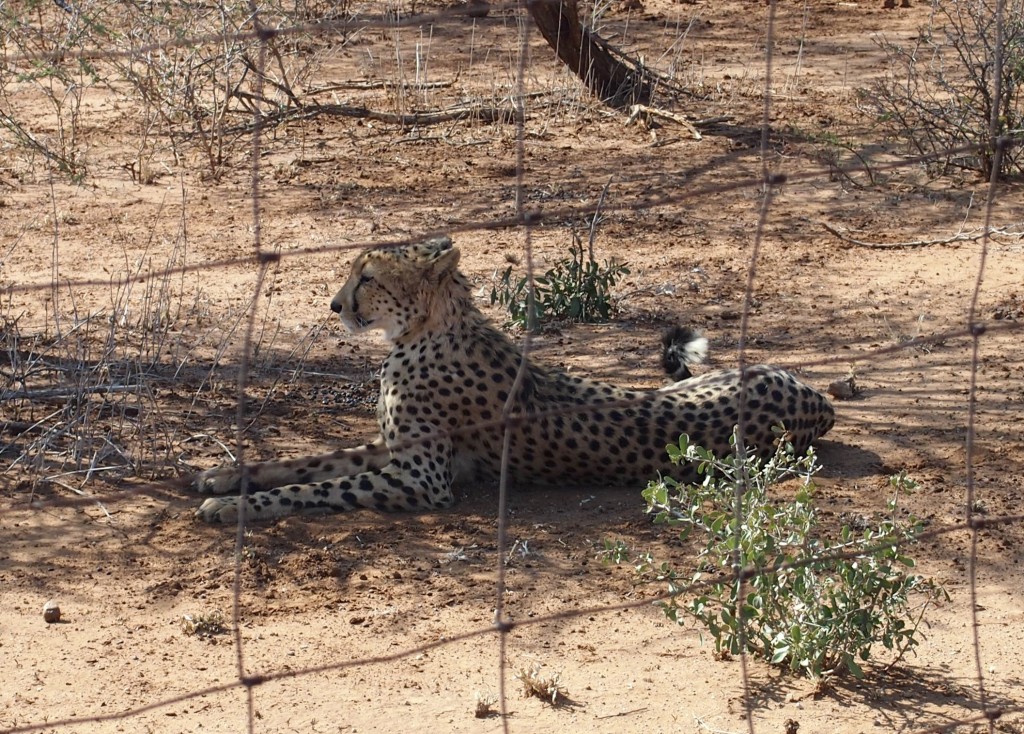 When you’re open to the magic of the universe- when she delivers exactly what you’re wanting, desiring or needing at the time right to your feet – you must be ready, willing, and able to respond in a quick and flexible way.

You must be totally alert when you receive what you’re asking for, to follow her lead.

Just a bit later, we happened upon a leopard. This was totally unexpected. The guide shared with us how it’s actually quite rare to see a leopard in the wild, let alone in such close proximity to the cheetah, and I was just blown away.

No really … it was like I couldn’t believe my eyes, or good fortune!

Suffice it to say, I was more than “fulfilled” by the time our morning journey ended. I thought “Wow … this has been an incredible day. How could it get any better?”

Fast forward – we head out for the afternoon safari. Despite the fact that my day had already kicked ass, I made the conscious decision to open up to wisdom.

So I asked Africa again: “What is the gift or medicine you have for me this afternoon?”

Minutes later, we came upon an entire herd of elephants (which, by the way, I learned is actually called a “trumpet” of elephants). 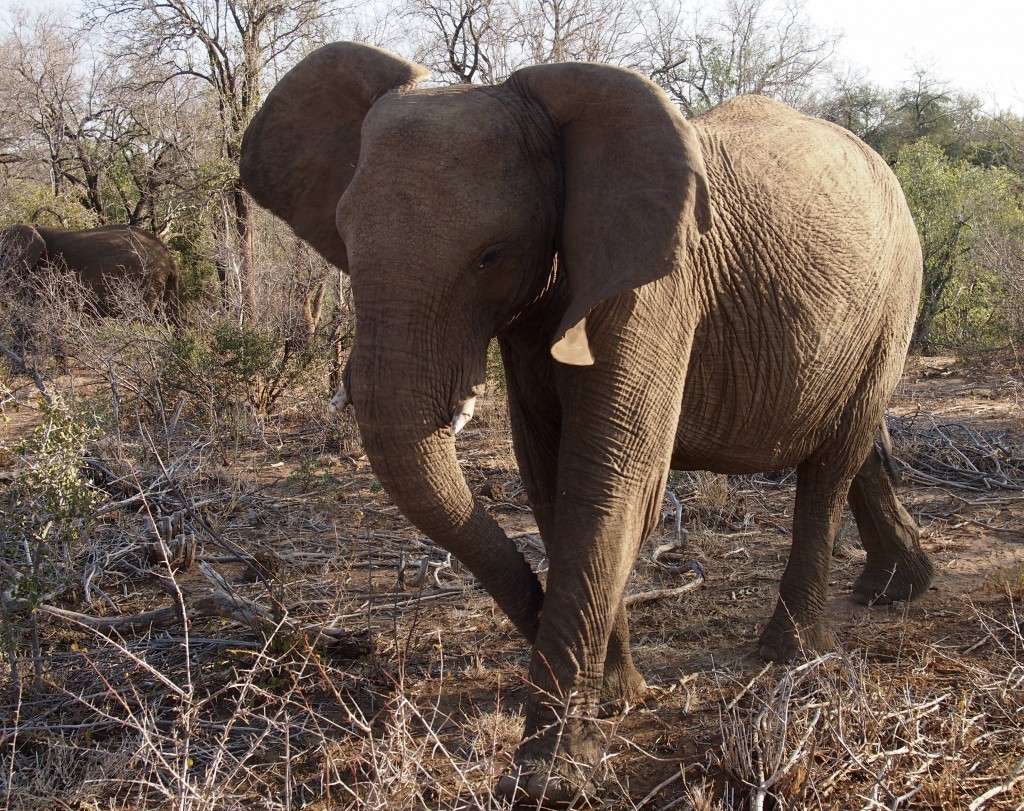 We watched them for a while, engrossed in their behavior and majestic beauty … until suddenly, the female that had been at the very back of the group (along with an old “grandpa” elephant) beelined straight toward me!

(Do you remember that scene in Jurassic Park, where the T-Rex starts chasing the jeep, and Jeff Goldblum is in the back with eyes as big as plates as he watched it racing toward him? That was ME!!)

This elephant was HUGE!

She kept right on at me, as the guide continuously reassured me that everything was fine – that she didn’t see us as a threat.

Still, I was freaking out. I mean, was he an elephant-whisperer?? How could he KNOW??

My entire body tensed up. I could hear each of her steps and see the dust “poof” as each giant foot hit the ground.

Soon, she was so close, I could have reached out and touched her. 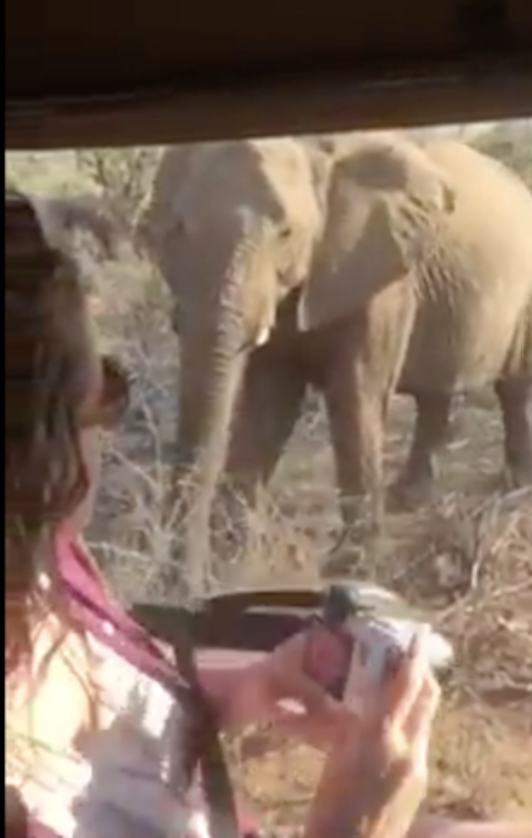 She approached the truck, inquisitively.

I looked into her big, beautiful, graceful, delicate, dark eyes.

She looked right back into mine.

Breathless, we looked into each other.

I marveled … she was SO big, and yet SO gentle.

It was probably only a minute or two, but it felt much longer.

Then, just like that, she turned away. (And the group collectively exhaled!)

That’s right when we realized the bigger grandpa elephant was following the same path the female had taken, heading straight toward us!

He was even bigger than she was. His ears flapped as he ran, and I had no idea if he was happy.

(Yep – I failed to breathe for a few moments, again!) 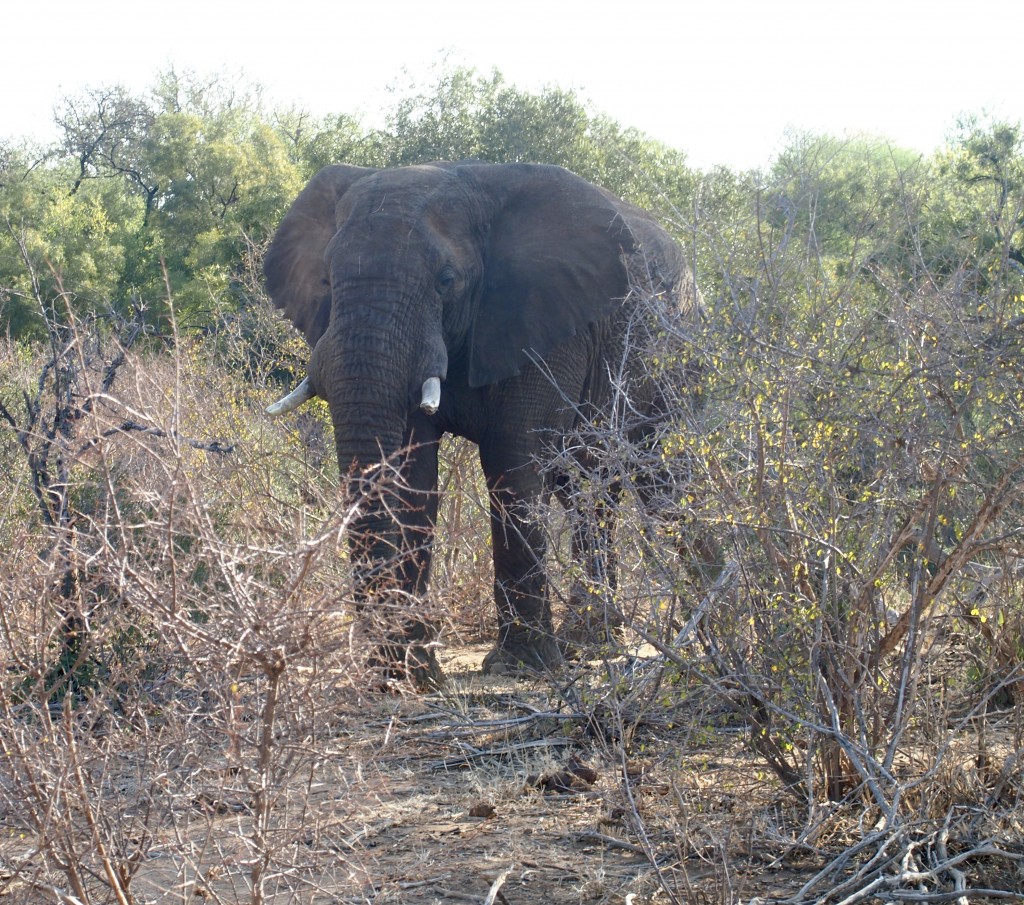 And just like the female, he came straight toward me, right up to the vehicle.

The guide must have been a little nervous at that point, because he started the truck.

The elephant, right next to me now, paused. He stared, and I felt like he was looking beyond my eyes, into something much deeper.

Then he turned, brushed along the vehicle, and off he went.

Again, so immense, yet so delicate.

“Bigness” can co-exist with gracefulness, simultaneously.

I can be a big, powerful being and make a huge impact, while remaining delicate and graceful.

As we headed away, I took a long, deep, grateful breath and thought, “My day is done. Complete. I’ve seen a cheetah and a leopard, and I’ve had a close encounter with elephants. This really IS the second best day of my life!”

But then something hit me.

I stopped right then and there and thought “Wait, we’re only 30 minutes in to this safari! Who am I to say I’ve had enough?”

You probably know what I did next, right?

I said, “Okay, Africa. What else have you got for me?”

And that’s when my amazing day became EPIC.

We saw a herd of giraffes. We saw a family of rhinos. We saw warthogs. We saw zebras.

We saw lions, and water buffalo, and wildebeests … “Oh my!”

We tracked lions, found a family of 4 females, and were able to get within about 20 feet of them.

Much to our surprise, we watched as they enjoyed a recent baby giraffe kill.  Yes, it was of course sad, and we experienced a mix of emotions. But the reality is that we were watching the circle of life … and despite the sadness for the baby, it was a sight I’ll never forget.

My friends, the entire experience was beyond my capability of describing adequately. It was CRAZY – crazy amazing! 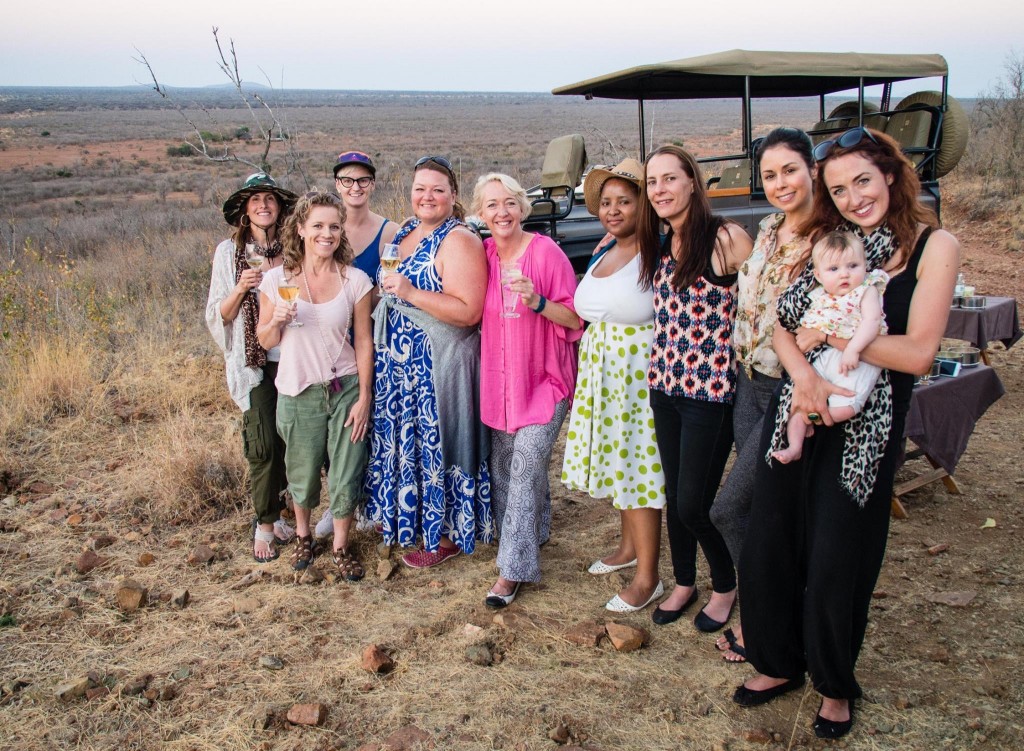 I saw all Big 5 predators that are so hard to hunt, and so rare to see – especially all in one go.

Later that night, we were sitting at dinner, and I thought again, “Wow. What a day. I am done. Fulfilled. Complete.”

And then again, I stopped myself.

There was still time in that day! It wasn’t over yet. So why was I putting a “cap” on my experience?

I shared my insights right then with the girls in our group, and it began a discussion in which we all expressed the same feeling: “Who are we to put a lid on our abundance … on what we’re here to receive?”

Soon, one of the women wanted to head home, so we dropped her off. When we heard a lion roar off in the distance, it was like a collective light bulb went off as we all had the same thought:  “It’s still going! The day is NOT done. Africa still has more to give!”

So we embarked on a night safari with our guide, and it did not disappoint.

We came upon a huge, gorgeous male lion standing right in the middle of the road. Our guide echoed our thoughts when he said, “Well, we’re not going home now!”

We followed the male lion for about 20 full minutes. All of the sudden, he stopped.

Our guide turned off the truck and its lights. It was pitch dark.

We knew the lion was less than a car-length in front of us, but we couldn’t see him.

Then he absolutely shattered the silence, as he let out this gigantic, loud, reverberating roar that hit me right in the heart!

Deep and guttural, I could literally feel my cells vibrate as the sound bounced back and forth between the hills.

I’m telling you, I was a different human being after hearing that lion.

And to think, I’d tried to put a lid on my day after the leopard!

So I broke into tears. Grateful and humbled, I couldn’t believe all I’d received and experienced.

Who am I to put a lid on my abundance?

If I’d “given up” that morning, after we saw the cheetah, the leopard, and the elephants, I would have missed SO much.

I would have effectively shut off my ability to receive.

Instead, I opened myself up for more.

And I received more.

So I want to ask you:

Where are you putting a lid on your abundance? Where are you cutting off what the universe wants to give you?

Be grateful for what you have, absolutely.

But I want you to stay open to MORE.

Surrender to receive the magic the universe wants to give you.

Because it’s always willing to provide it. You don’t have to worry about the how.

In South Africa, we didn’t try to script anything or bring the animals to us. We were simply open to receive, and the universe took care of the magic.

So, every morning, I want you to ask the universe, “What do you have in store for me today? I am open to receive.”

Then, wait to be dazzled!